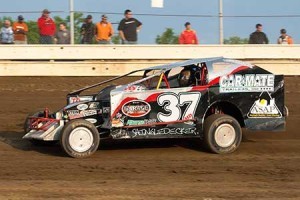 Rex King matched his son “Cooter” and point leader Jim Weller, Jr. with his second victory for tops in the DIRTcar Big-Block Modifieds. The elder King led all 20 laps of the Governor Insurance Agency feature holding off a valiant charge by Jeremiah Shingledecker.

“Finally,” stated the veteran standout from Bristolville, Ohio. “I haven’t liked my race car the last few weeks. It looked like you had to enter high and drive down and diamond across the bottom. That’s where it worked. You have (Jeremiah) Shingledecker, (Jim) Weller, (Dave) Murdick, Cooter- there’s a lot of good guys here so it’s no walk in the park by any means. I have a lot of great sponsors I have to thank them and the fans at Sharon Speedway.”

King out-motored the “358” small-block of Eric Gabany to blast into the lead. Gabany, Shingledecker, Jimmy Weller III and Dave Murdick filled the remainder of the top five after the conclusion of lap one. Sixth starting Weller, Jr. went around both Murdick and his son for fourth on lap three with Murdick following in fifth. Shingledecker caught Gabany on lap three making it a three-car race for the lead. Three laps later, Weller, Jr. caught the front-pack as it was now a four-car battle for the lead!

Shingledecker finally made the move for second on lap eight driving under and past Gabany in turns one and two. Shingledecker then closed in on King at the halfway point as he was running faster laps than the leader. In the end, a caution probably wasn’t what Shingledecker wanted as the pace was slowed with 11 laps completed due to a spin by Bob Warren.

Back and under green, the last nine laps would go green-to-checkered. Shingledecker tried every move possible, but King ran the preferred line and would hold on by just 0.830 of a second in the KMB Inc.-owned, GS Engine Power/Midway Garage Door/University Hospital-sponsored #65. It was King’s first win since the second night of racing back on April 27, but 44th of his career at the Speedway!

Shingledecker’s runner-up matched his season-best effort. Weller’s third allowed him to continue to maintain a fairly comfortable point lead of 18 over King. Murdick was fourth over Gabany, who turned in his second straight fifth-place finish. Sixth through 10th were Weller III, Chris Haines, King, Jr., Ricky Richner, and Tom Glenn.