JEREMIAH WINS 1ST EVER AT SHARON!

(June 16, 2010) Jeremiah Shingledecker has been without a doubt one of the region’s top Big-Block Modified racers since winning his first feature in 2005 at Tri-City Speedway; however Sharon was a track that always eluded Shingledecker. When Sharon made the decision to go DIRTcar-sanctioned in 2012, Shingledecker threw his support at the speedway; however, car and engine woes suffered throughout the season at other area speedways has seen him limited to just three appearances prior to Saturday night. Shingledecker though had finished in the top five in all three visits including a season opening runner-up. 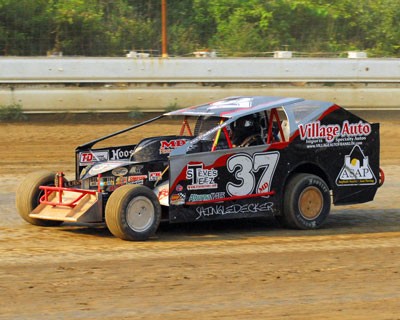 Dave Murdick started sixth and passed Skip Moore, Jim Rasey, and Carl Murdick on the opening lap for third. Murdick then overtook Rob Kristyak for second on lap two. Murdick though would be unable to pass Shingledecker trailing him to the line by 0.722 seconds as he recorded his second straight runner-up and impressive sixth top five in as many starts.