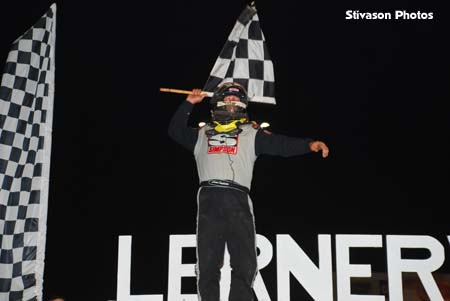 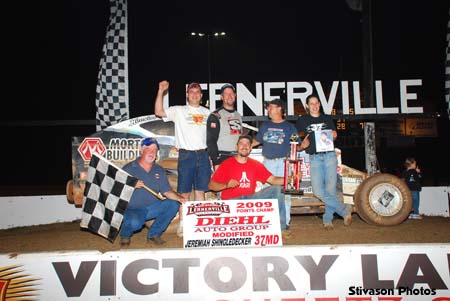 As the Diehl Auto Group DIRTcar Modifieds rumbled onto the Action Track, Swartzlander held a nine point margin over second place Kevin Bolland and 13 points over third place Jeremiah Shingledecker. And with the first two Track Championships being claimed by the points leader entering the night, it seemed inevitable that Brian Swartzlander would clinch his seventh Track Championship. But inevitable was not in the cards! After a disappointing finish to the late model feature, Dave Murdick took the green flag from the pole and took the early lead. Swartzlander’s championship thoughts got a slap in the face on lap three when he got some help spinning in turns one and two while running fifth. Staring down the rest of the field while facing the wrong way in turn two, Swartzlander took what appeared to be light contact on the right front with the 29D car of Dustin Martin. Swartzlander rolled into the pits to assess the damage, but returned to tail the field. Apparently the damage was significant as he spun again in turn two just two laps later and was drilled by Dustin Martin, knocking him out of the race and the title hunt. Swartzlander’s surprising DNF left the 2009 Track Championship up for grabs between Bolland and Shingledecker.

By lap five, Shingledecker had wrestled the lead away from Murdick, while Bolland restarted lap six in sixth place. In order to at least enjoy a share of the championship, Bolland needed to finish two spots behind Shingledecker. That scenario became more of a reality on the lap 11 restart as Murdick took the lead, relegating Shingledecker to second. Meanwhile, Bolland got around Skip Moore for fifth. By lap 15, Shingledecker took the lead back for the final time, but Bolland could not get around Dean Pearson who ran strong all night long! As the race progressed, Murdick had trouble keeping his Armstrong sponsored mount on the top cushion of turns three & four. He was faster than Shingledecker in turns one & two, but bounced around the cushion in turns three & four, losing significant ground on each lap. Perhaps trying to find a smoother line around the top of three & four, Murdick jumped the cushion coming to the white flag, allowing Shingledecker to pull away to a thrilling win of the race and to steal away the 2009 Track Championship!