After a brief absence, the 37MD was back in Victory Lane on Sunday night, where it looked right at home! 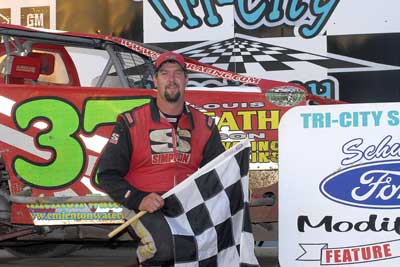 Jeremiah Shingledecker of Polk, Pa., dominated the 20-lap DIRTcar Big Block Modified main. Like Felmlee, Shingledecker started on the pole position. However, Shingledecker was peerless on this night. Building momentum on the high side of the half-mile, Shingledecker cruised to the win, which was his third of the season, after a string of recent bad luck in his Carmate Trailers/Quaker Steak & Lube/Lou Heath & Son Excavating and Trucking Bicknell No. 37MD. It was Shingledecker’s eighth career win at Tri-City.

“Our team needed this win,” said Shingledecker after his eighth career victory at Tri-City. “I’d like to thank my dad and the entire crew for all their hard work. The high side was the best it’s been all season.” 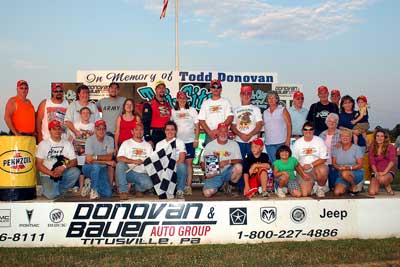 Shingledecker took immediate command of the race at the start. Behind him, Rex King Jr. ran second until his father, Rex King, took the position on the second circuit following a restart. The youngest King surprised the elder King taking back second on the fourth circuit. Another restart on the eighth circuit almost proved to be King Jr.’s undoing when the sophomore sensation drifted high in turn four and allowed his father and Kevin Bolland to pass him. However, King Jr. lucked out when a car spun in turn one to cause a caution that returned him to second. He held that position on the ensuing restart, but Bolland passed the elder King for third. Bolland challenged King Jr. for about three laps before King Jr.’s tires heated and he pulled away from the point leader. In the end, Shingledecker won by over four seconds. King Jr. scored his best career finish in second followed by Bolland, Rex King and Russell King. Chris Schiffer and Del Rougeux Jr. won the DIRTcar Big Block Modified heats. 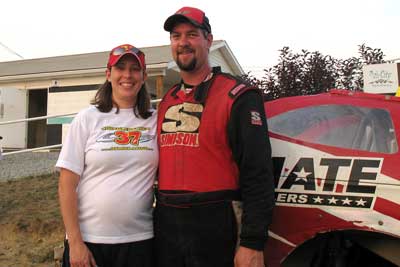