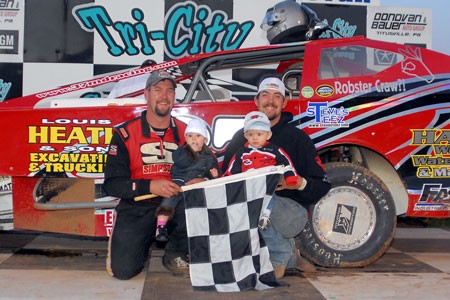 Jeremiah Shingledecker of Polk, Pa., came of age in the 20-lap DIRTcar Big Block Modified feature. Holding off the hard charging Kevin Bolland and Andy Priest, Shingledecker proved that his name belongs in the annals of Tri-City history as a top runner. From slide jobs to restart challenges, the two former track champions threw the book at Shingledecker. In the end, he held on for his second win of the season and the 10th of his career at Tri-City.

“Those were great battles,” said Shingledecker. “Andy made an awesome pass. I hope I didn’t pinch him too bad in turn two to take back the lead. Then, on that restart, the car stuttered and Bolland got by me. I was glad when that caution came out. This was an awesome race for our team. I’d also like to thank Tri-City for keeping the big blocks here. We all have a lot of fun.”

Starting on the pole position, Shingledecker took the early lead. On the second circuit, Priest made a bonsai run in turn four pulling off a slide job on Shingledecker to lead. Then, Shingledecker made the same move on Priest in turn two on the same lap. Shingledecker drifted in front of Priest just enough to take the lead and prevent any contact. The move left the fans in awe.

Two laps later, Bolland drove under Priest in turn four to take second. The two veterans exchanged the position three times before Bolland secured it and he started to chase down Shingledecker. After a caution on the 11th circuit, Shingledecker’s car stuttered on a restart, and Bolland drove under the leader in turn two to take the lead. Just as Shingledecker raced to the high side in turn three to try to take back the front spot, rookie Kyle Fink spun in turn one causing a caution that nullified Bolland’s pass.

On the final restart, Shingledecker would not make the same error and he blasted away from Bolland. Behind the duo, Priest held third while Dave Schrader, Joe Crawford and Skip Moore dueled for fourth. Their battle occupied the fans over the final distance. At the line, Shingledecker was the winner over Bolland, Priest, Schrader and Crawford. Bolland and Crawford won the DIRTcar Big Block Modified heats.