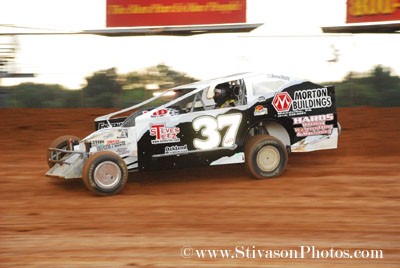 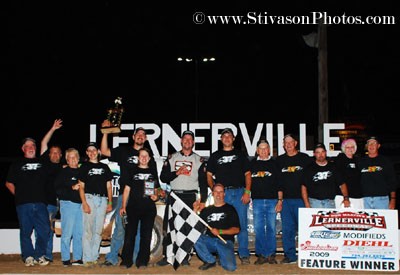 Immediately following the Late Model thriller, the Diehl Auto Group DIRTcar Modifieds rumbled onto the speedway with Tom Winkle and Carl Murdick on the front row thanks to a couple of lucky fans. Winkle (#28 of Mars) took the early lead when the green flag waved and led the first five laps of the 25 lap feature. Seeing John Flinner and Ed Lynch Jr. both lead most of the previous 52 laps using the high side of the Action Track, Jeremiah Shingledecker followed their tire tracks and blasted around the outside of turn two to into second place on the opening lap from the sixth starting spot. After an early caution slowed the field, Shingledecker (#37MD of Polk) pulled even with Winkle at the flag stand to complete lap two. They battled door-to-door in turns one & two, then drag raced down the back straightaway, with Winkle prevailing again at the flagstand; but it only delayed the inevitable. On lap six, Shingledecker took the lead exiting turn two and did not look back as he dominated the rest of the way to capture his first Lernerville Feature of 2009, and in the process take the points lead in the Diehl Auto Group DIRTcar Modified.

The race behind Shingledecker for second was a heated battle between early leader Tom Winkle, Del Rouguex Jr. and Kevin Bolland. When the checkered flag waved is was Bolland (#777 of New Brighton) prevailing, with Winkle crossing the stripe third. Rougeux had to pit under caution on lap 21 and would eventually recover to finish ninth. Tri-City regular Joe Crawford (#25 of Polk) ran a solid race to finish fourth after starting 11th. Dave Murdick (#61 of Slippery Rock) finished fifth after a lengthy battle with Keith Swartzlander, subbing for brother Brian, whom was still feeling the after effects of the wreck at PPMS last month. Swartzlander was joined in the top ten by Dean Pearson, Erik Martin, Del Rougeux Jr. and Steve Feder. Heat races were checkered by Kevin Bolland and Del Rougeux Jr.