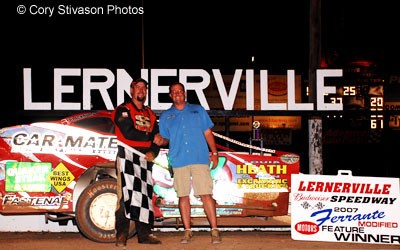 Jeremiah and the 37MD team traveled to Lernerville on Friday night and brought home another victory. It was Jeremiah’s 4th win at the Sarver oval and 7th over-all on the 2007 season.

From the Lernerville press release:

Tonight’s Main Event featured the Ferrante Motor Cars Modifieds. Thankfully, after two caution-filled features, the Bog Block Modifieds rumbled off 25 consecutive laps, no cautions, with Jeremiah Shingledecker winning his fourth feature of the season. Shingledecker, (#37MD of Stoneboro), led the final 24 laps of the 25 lap feature on his way to Victory Lane. Shingledecker was challenged first by Del Rougeux Jr., then by Kevin Bolland. Bolland, (#777 of New Brighton), was scored in second, after taking a few weeks off from the Action Track after a couple heated, on-track incidents. 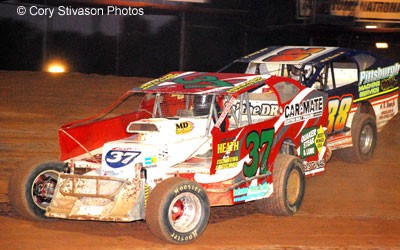 Rougeux, (#20D of Frenchville), who has also been involved in some on-track incidents recently, crossed the finish line in third place. Phil Evans Jr., (#38 of Greensburg), had his best finish of the season by coming home fourth. “Double Duty” Dave Murdick, (#61 of Slippery Rock), rounded out the top five for the Modifieds, after finishing 13th in the Late Model feature. Budweiser Points Leader Brian Swartzlander, (#83 of Leechburg) was also pulling double duty tonight. He finished sixth in the Modified feature and seventh in the Late Model feature, driving for the vacationing Gary Lyle in the #10. Swartzlander and Rougeux won their respective heat races. 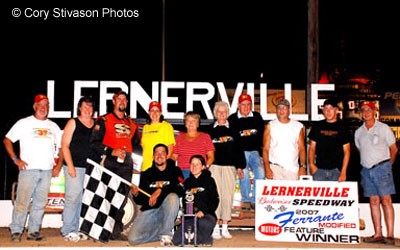