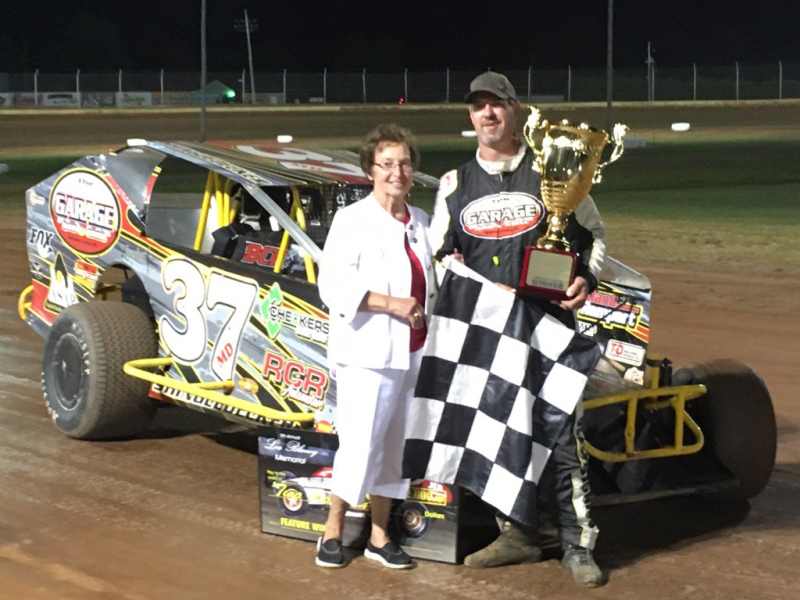 Making his season debut, Jeremiah Shingledecker ended a near four-year winless drought at Sharon after a wire-to-wire win in the 30-lap Hovis Auto & Truck Supply Big-Block Modified feature. Shingledecker earned $2,000 as he became the eighth different “Lou Blaney Memorial” winner in nine events on the Modified side as only last year’s winner, Jim Rasey, has been able to repeat amongst both divisions.

“Unfortunately our luck hasn’t been real good here so hopefully we turned it around,” stated the 40-year-old Polk, Pa. driver. “This reminds me of the old Tri-City (Speedway) surface. It’s a really nice surface. You guys have done a really great job with it. We went from silty sand and single file racing to this. We’ve been trying to get the car a little bit better and we were edging on this since last year. I really have to thank my dad. He spends a lot of time on these engines. I’d like to thank the Blaney Family and all of Sharon for putting this race on. It’s a very good race. When I first started racing I looked up to Lou Blaney and got to race with him a few years before he got out of the Modifieds.”

Shingledecker took off in the lead after an invert four from the heat races over point leader Dave Murdick, Kevin Bolland, Rasey, and Jim Weller, Jr. Murdick clipped an infield tire on lap two and spun to bring out the caution. After a caution for a spin by rookie Modified racer, Colton Walters, Weller got by Rasey for third on the lap five.

Shingledecker began to pull away by lap 10 and two laps later was in lapped traffic; meanwhile, the battle for third was hot and heavy between Weller, Bolland, and eighth starting Rex King, Jr. On lap 15, it was three-wide for the spot as Rasey spun in turn three. This moved King, Jr. to fourth for the restart, but it was short-lived as two laps later ninth starting Brian Swartzlander made the pass.

King, Jr. didn’t go away as he got on the top and it was three-wide again for third this time with King, Jr. prevailing over Swartzlander and Weller. Shingledecker had pulled away from Bolland, who sat fairly comfortable ahead of the continual battle for third, before a spin by Murdick with 27 laps completed halted action for the final time.

Bolland was unable to make the pass on the double-file restart, as Shingledecker maintained his lead over the final three laps and went on for his third career Sharon win, but first since September 13, 2013, by 0.560 of a second in his Garage Bar & Grill/RCR Auto-sponsored #37MD.