After spending two weeks at the rear of the starting line-ups because of his string of successes, Jeremiah Shingledecker drew the pole for the twenty-lap Krill Recycling LLC 358 Modified feature race. He had D.J. Schrader on his right. Behind them were Jimmy Holden and Lonnie Riggs.

The championship was determined when the green flag was shown to the field and, for all intents and purposes, so was the feature event. Shingledecker took the lead and only one caution, on lap two, would slow his progress.
He had smooth sailing over the remaining eighteen laps, winning by 3.412 seconds. Jimmy Holden took over second on lap six and held it the rest of the way. Riggs took third, matching his best run of the season. Joy was fourth, a season’s best for him. Unverzagt crossed in fifth, giving him top-fives in consecutive weeks. 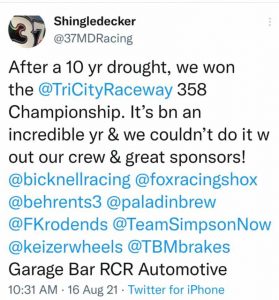