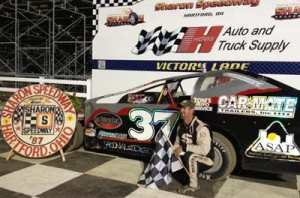 Sept. 7, 2013: Jeremiah Shingledecker has only competed at Sharon on a part-time basis this season in the DIRTcar Big-Block Modifieds. Shingledecker had previously recorded a trio of runner-ups and a pair of third place finishes this year, but just hadn’t been able to crack victory lane. That changed on Saturday night when Shingledecker powered to victory holding off point leader Jim Weller, Jr. in the 20-lap Governor Insurance Agency feature.

“Where are all of those cautions when I’m starting in the back,” joked the 36-year-old Polk, Pa. racer. “The car hooked up really good. We’ve been trying some different stuff. We want to go down to Charlotte (World Finals) this year and I thought in order to do that we need to get faster than what we’ve been this year. It seems to be working. I almost took the high side, but I hadn’t been challenged so I thought ‘I better stay down here’. I have to thank the whole crew. My wife is in Indonesia this week so it’s just Rick and Chanda. She’s going to be pretty bummed she wasn’t here, but she’s on an airplane on the way home.”

Rob Kristyak took off in the lead, while Shingledecker went from his fifth starting spot into second place after one lap! Several cautions slowed the event in the first three laps. Weller started seventh, but was on the move passing Tom Mattocks for third on a lap four restart with Dave Murdick following in fourth. After a multi-car accident with five laps scored, Weller drove under Kristyak for second in turn four.

While Shingledecker continued to lead and Weller was trying to track down the leader, the battle was on for third with Kristyak trying to fend off Murdick and Kevin Hoffman at the halfway point. Murdick was able to get by Kristyak for third on lap 14 and then one lap later Kristyak got too high in turn three and smacked the fence ending his run and necessitating the event’s final caution.

Weller had one more shot at Shingledecker, but Shingledecker was too strong in his Car*Mate Trailers/Bilstein Shocks #37MD Bicknell taking the win by 1.316 seconds over Weller. The victory was just the second of Shingledecker’s career at Sharon with his other triumph coming on June 16, 2012.