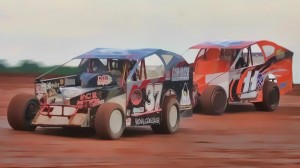 July 19 – The 37MD Racing team ventured west to visit Wayne County Speedway in Orrville, Ohio for the first time, for a stop on the BRP Modified Tour.

To say the night did not go as planned would be a major understatement.

In the heat race, we broke a driveshaft. After hustling to get that replaced, Jeremiah had to start at the tail-end of the feature. By starting so far back, the 37MD was involved in not one, but two wrecks,

Despite all of the misfortune, Jeremiah was still able to drive forward and lodge a 6th place finish.

Next week it is back to familiar territory as we resume the chase for the Championship at Lernerville. Hope to see you there, cheering on the 37MD team.