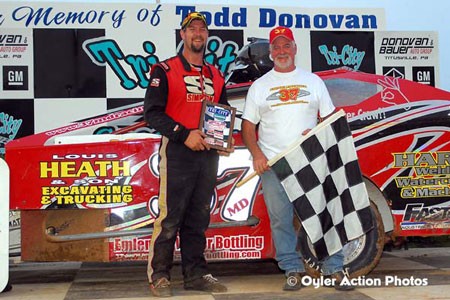 Jeremiah Shingledecker of Polk, Pa., earned a stellar victory in the 20-lap DIRTcar Big Block Modified feature. After swapping the lead with two-time defending track champion Kevin Bolland a half dozen times, Shingledecker secured the lead on the 13th circuit, and raced to his third win of the season and the 11th of his career at Tri-City.

The win was extra special for Shingledecker because he suffered terminal engine woes racing at Lernerville Speedway on Friday night. His father, Mike, worked into the wee hours of the morning for his son to have the power necessary to grab the stirring win aboard the Lou Heath & Son Excavating/Hards Welding/Fastenal Bicknell No. 37MD

“That was an amazing race,” said Shingledecker in victory lane. “I kept trying to get past Kevin and finally drove under him to block him. I have to dedicate this win to my dad. He worked all day Saturday until early this morning to get this car ready.” 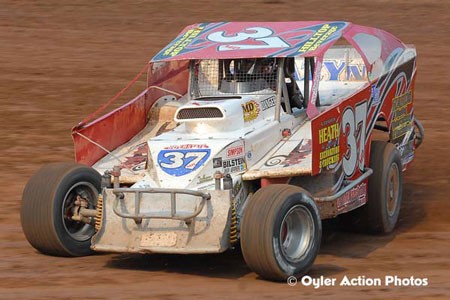 Starting on the outside pole position, Shingledecker took command at the start. Bolland quickly zipped under Shingledecker for the lead on the third lap following a restart. That started one of the most amazing races in recent memory. Lap after lap, Shingledecker would dive under Bolland into turn one, slide in front of him in the middle of the corner, and Bolland would shoot off the top side to take the lead back off turn two. At the other end of the track, Bolland stayed high while Shingledecker tried to make the low groove work.

On the 13th circuit, Shingledecker finally made his move in turn two stick. Behind him, Rex King was also moving to the front fast. He caught the lead duo at the same time Shingledecker made his final pass, and hooked Bolland’s bumper briefly. Bolland held on, but Shingledecker dashed away from him. As the laps wound down, Shingledecker stretched his advantage and scored the popular win. Bolland and King chased him to the line. King is scheduled for midweek neck surgery, so this was his final race for at least one month. Andy Priest and Rex King Jr. rounded out the top five. Shingledecker and Gary Smoker won the DIRTcar Big Block Modified heats.