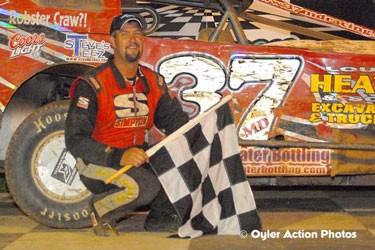 Jeremiah Shingledecker of Polk, Pa., engaged in a battle royale with point leader Kevin Bolland in the 21-lap DIRTcar Big Block Modified feature as the two continue their duel for the track title. This time, Shingledecker came out on top following a near collision on the final circuit when Shingledecker dove to the low side in turn three to block a move by Bolland. Shingledecker captured his fourth feature win of the season aboard the Lou Heath & Son Excavating/Hards Welding/Fastenal Bicknell No. 37MD.

“Kevin is tough on restarts,” said Shingledecker after his 12th career win. “He got close and I didn’t think I’d carry enough momentum into turn three, so I went low. I had to do it to win.” 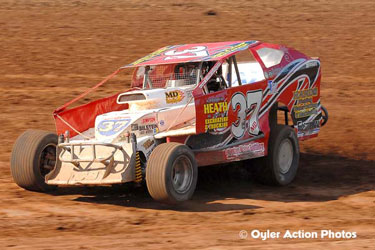 Les Myers jumped into the lead at the start of the race. By the fifth circuit, Shingledecker was running second. Bolland, who started 11th, worked his way into the top five on the sixth circuit. He was running third two laps later. The two point leaders then hounded Myers. Shingledecker took command of the race on the ninth circuit, and Bolland followed him past Myers into second at the halfway point.

Following three successive cautions, on the third restart, Shingledecker used the high line while Bolland hugged the low line around the half-mile oval. The two raced side-by-side in the turns for two circuits before Shingledecker started to pull away. It appeared that the race was in Shingledecker’s hip pocket. Then, after the leaders took the white flag, the final caution waved. 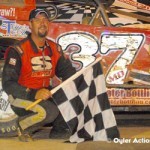 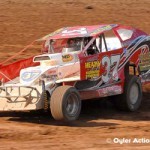