“I can’t take all of the credit for it,” Shingledecker said modestly. “These guys (Kevin and John Hoffman) have been pretty fast the last few weeks. We put a couple of pads behind me, and I was good to go.” 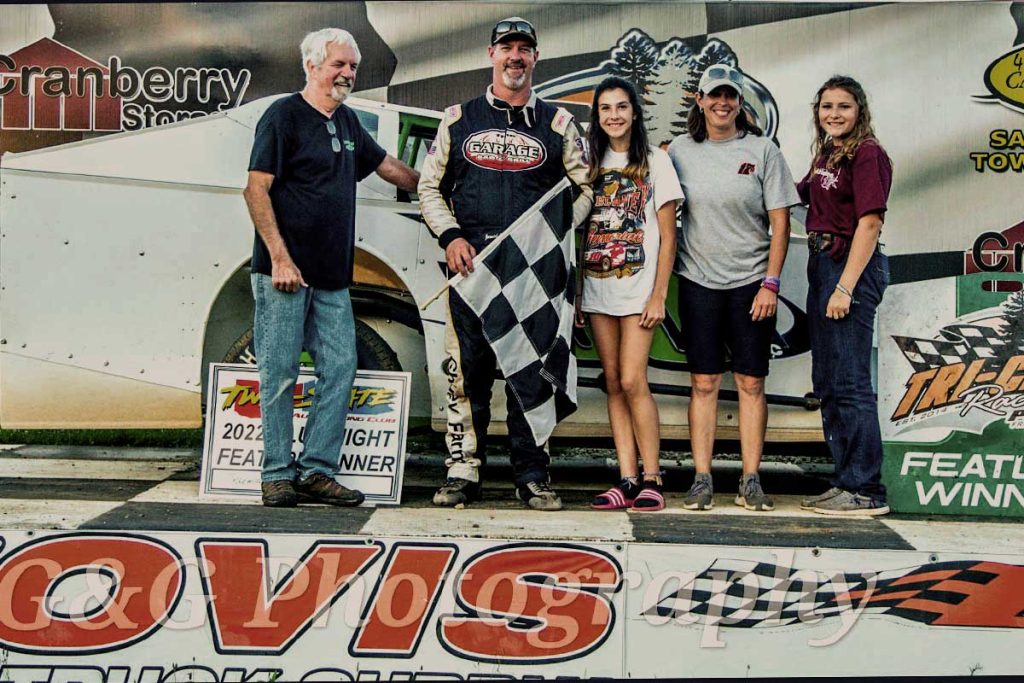 Shingledecker added, “this was my first and last night in the car. I hope that Kevin is feeling better soon. He’s pretty sore.”

Shingledecker will not be back in his own car, the 37MD, as that machine was recently sold to new competitor Austin Eyler. Shingledecker will concentrate on his Big Block car for the remainder of the year. He is unsure of his plans for 2023. “We’ll see over the winter, we may put a Big Block in (the spare car), or we may build another Small Block.”

Lonny Riggs had the pole for the start of the twenty-lap race for Donovan & Bauer Auto Group 358 Modifieds. Jimmy Holden was on his flank. Nick Joy and Jeremiah Shingledecker were in row two. Sid Unverzagt, Jr. made his first feature start of the 2022 season from the fifth spot. He was paired with Eric Beggs. Jeremy Beichner and Austin Eyler made up the last row.

Holden took the lead at the drop of the green, with Riggs holding second and Nick Joy third. However, Shingledecker raced into second by the conclusion of lap one. He stalked Holden for several laps, trying high and low. He made the pass between turns one and two about five laps into the fray.

Shingledecker stretched his lead over Holden while a good battle was going on for the third position amongst Riggs, Joy, Unverzagt, and Beggs. Soon that contest became a two-car race between Riggs and Joy.

A caution with two laps remaining brought Shingledecker back to Holden. Holden got a good jump off turn four when the race resumed, but Shingledecker drove through the middle of the track to take command at the other end of the track.

Shingledecker won the two-lap dash for all the cash. Holden was second. Joy got by Riggs for third. Beggs, who was the cause of the caution, recovered for fifth. Unverzagt, Eyler, and Beichner rounded out the field.

Winning the preliminary was Jeremiah Shingledecker.